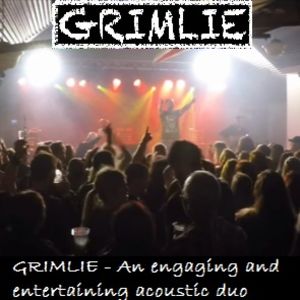 GRIMLIE are an entertaining, engaging and interactive acoustic duo playing a wide variety of songs. Classic hits covered by both male and female artists/bands Grimlie can slow it down for a Sunday afternoon chill out or ramp it up with high energy acoustic covers. Having recently opened for Shannon Noll's 2019 WA tour playing to 500+ people Grimlie have years of experience along with musical flair. Grimlie play both all over the Perth metro area along with regional WA and their annual tour of Bali. Give them a call - Sure to be impressed.


GRIMLIE is Paul Leslie (Lead Vocals) and Mark Grima (Guitar/Vocals) who previously made up two thirds of the popular Perth acoustic trio “FLUID” from 2002.

Together Paul and Mark known as GRIMLIE blend a unique mix of popular songs through a variety of era’s played with their own flair and entertaining style.

Paul and Mark capture the audience with hit songs not often covered acoustically along with songs performed by female artists such as Taylor Swift (Shake It Off), Cyndi Lauper (Time After Time), Tina Turner (Simply The Best) and The Cranberries (Zombie).

Very much an interactive duo who love to engage the audience GRIMLIE have been entertaining all over Perth mixed in with regional shows and along with their annual tour of Bali.

Mark formed and played in the Perth Pink Tribute Band “PINKED” and has brought the tribute theme to GRIMLIE who cover Robbie Williams, Matchbox 20 and Crowded House all performed acoustically.

We strongly recommend that all communication with GRIMLIE - Acoustic Duo be kept within CrowdPleaser's secure quoting and booking platform. We can only guarantee deposits paid through the CrowdPleaser website. You should also make sure their quote includes their cancellation and payment terms.


These are the categories of entertainment or other services offered by GRIMLIE - Acoustic Duo.

Grimlie is a self sufficient acoustic duo with PA, Speakers, lighting to set the mood for any occassion.