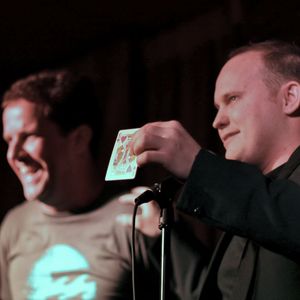 Ready to take your event to the next level? Pete Booth's show is a combination of magic and comedy designed to be an unforgettable ice-breaker at parties and functions to get your guests in a fantastic mood for the night and make your event as much fun as possible, or an hilarious and mind-blowing after-dinner entertainment to leave everyone with a great memory of your event they will take with them and talk about for months. Whether it’s an awards night, annual general meeting, cocktail evening or gala dinner, the goal is to create experiences that reflect the unique personality of each client.


Pete’s comedy magic show is a combination of stand-up comedy, magic and plenty of audience participation. Pete has performed the show for companies such as RSVP.com, Sit-Down Comedy Club, Albion Comedy Club, the Laugh Lab Comedy Club, McCullough Robertson Lawyers, the Australian Counselling Association, St. George Bank, Queensland Government, Griffith University, Bond University, The University of Queensland and many others, as well as numerous other comedy clubs and restaurants around Australia.

Walkaround magic is the ulimate ice-breaker. Pete enters and says hello, then starts to share with them some magic and suddenly everyone is talking and laughing. People from other groups start to walk over to see what is happening. Pete is introducing everybody to each other. Everyone is laughing and interacting. Then when Pete moves on to the next group, everyone is talking about what they have just seen. People who were strangers before are now having a great time together. The mood has gone from slightly awkward and potentialy uncomfortable to a party-atmosphere.

We strongly recommend that all communication with Comedy Magician Pete Booth be kept within CrowdPleaser's secure quoting and booking platform. We can only guarantee deposits paid through the CrowdPleaser website. You should also make sure their quote includes their cancellation and payment terms.


These are the categories of entertainment or other services offered by Comedy Magician Pete Booth.

Walkaround magic and comedy and magic stage show are available as a package.